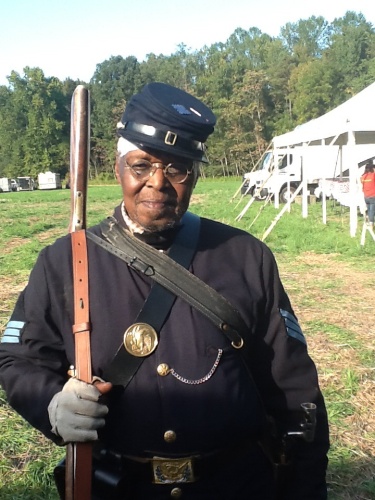 Bennie White of Company A, 54th Massachusetts Volunteer Infantry; he was one of the many Reenactors/Living Historian at the Battle of New Market Heights Commemoration, September 27, 2014

This past weekend (September 27, 2014) I attended a commemoration of the 150th anniversary of the US Civil War’s Battle of New Market Heights in Henrico County, Virginia. The county borders the city of Richmond, which was the Capital of the Confederacy. Many battles took place in the vicinity before the end of the war in early 1865.

The commemoration included a number of events, the highlight being a staging of the battle by a large group of Confederate and Union soldier reenactors.

New Market Heights is significant as the battle which earned the Medal of Honor for more than a dozen soldiers of the United States Colored Troops, or USCT. The USCT was the part of the Union army which contained…