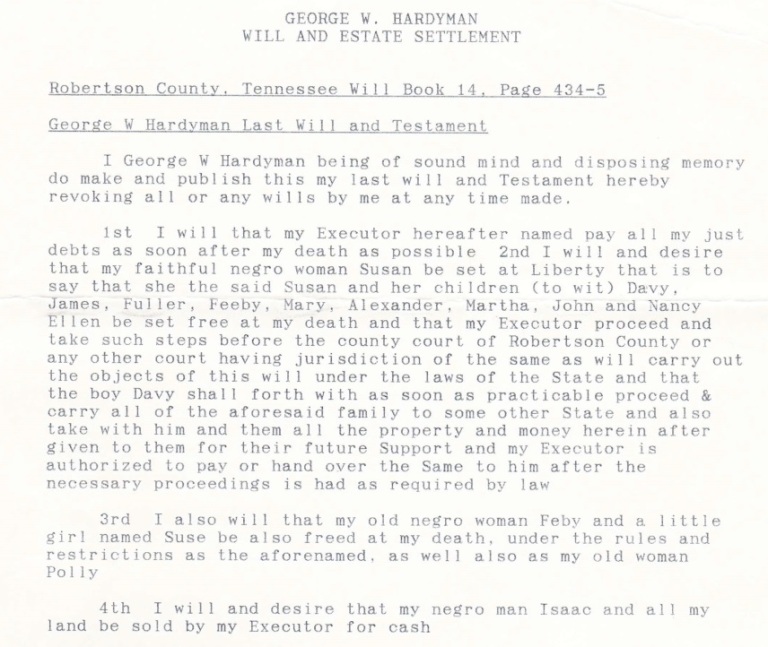 I recently found my 5th great grandfathers will. His name was George Washington Hardiman, a Virginian living in Robertson County, Tennessee in the mid-19th Century. In his will George freed my 5th great grandmother Susan, their 9 children David, James, William Fuller, Phoebe, Mary, Alexander, Martha, John, and Nancy Ellen, two older women Feby and Polly, and one young girl Suse. He also ordered that all other property be sold, and the money be given to those he freed to help them relocate outside of Tennessee. On the list of property sold was a man named Isaac who was sold for $496 to one JC Stark. of Robertson County. For months I struggled with the how my family benefited from Isaac’s enslavement. I recently decided to do some digging to find out what I could about Isaac after he was sold. Recently I identified the man who purchased Isaac as Joseph Carter Stark. Stark was a prominent lawyer, judge, and State Senator representing Robertson and Montgomery Counties. In the 1860 Federal Census – Slave Schedules, Joseph C. Stark is listed as enslaving 14 African-Americans. Unfortunately, the slave census records do not list the names of the enslaved community, however there is only one 40-year-old man listed. In George Washington Hardiman’s will and inventory he lists Isaac as “Negro Man”. The other men listed on Stark’s 1860 slave census would have been too young to be listed as a man ten years prior. If this is Isaac on the 1860 census he was sold to a man on the rise, Stark was elected to the Tennessee State Senate in 1851.

While I did not make the choices of my ancestors I am a product of their choices, their successes and their failures. I grapple with the memory of my grandfather George. He freed all but one of the people that he owned. His children settled in Indiana after being manumitted and his sons would return to the south nearly 15 years later. This time donning a blue federal issued uniforms and wielding rifled muskets. The war years would bring the new opportunity for Isaac and thousands of other Black families in Tennessee to cast off the shackles of slavery and find freedom.

Will of George Washington Hardiman freeing Susan and her children